The phenomenon that lithium ion battery appears in extrusion process

In order to guarantee the safety of lithium ion battery in these cases, people design the harsh extrusion tested lithium ion battery in the case of large deformation safety performance of the battery. Research shows that, in the process of extrusion test will happen first electrode uniform deformation and displacement, with the increase of deformation degree, leading to set fluid slippage along the slip line 45 degrees, because the diaphragm deformation degree is too large, lead to the diaphragm failure, cause more large short circuit occurred. 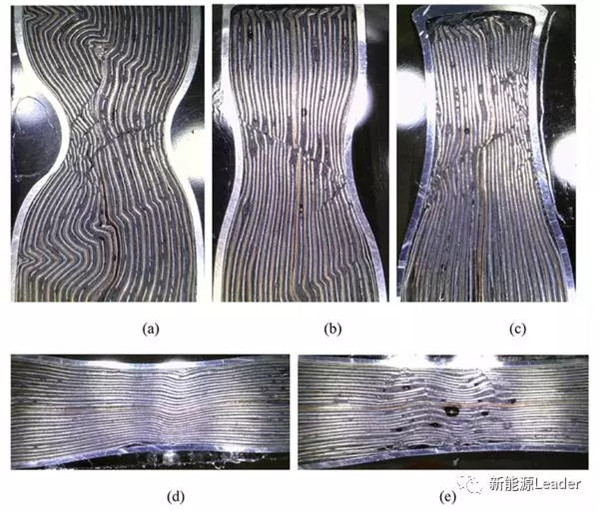 The experiment used for commercial cobalt acid lithium batteries, the size of the winding structure is used in batteries' 4.5 mm to 30 mm '40 mm, in order to keep the lithium ion battery, unapt happening in extrusion tests thermal runaway HsinWang power control within 10% SoC of the battery below after extrusion test for battery cell structure, which figure c without extrusion of the battery, the internal structure of figure d to test the internal structure of battery after extrusion, can see from the graph, electrode before and after the extrusion test the symmetrical folding and fold phenomenon, and happened some electrode layer bend produces a larger gap between the electrode layer. 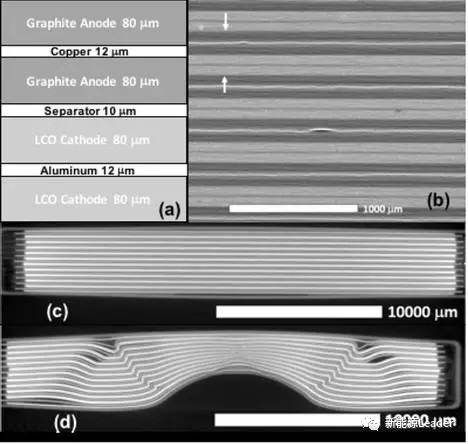 Below for the image of local amplification, you'll notice from the figure, the cutting direction electrodes embedded suffered serious folding and deformation, through comparing can see figure c and d, the battery produces a large amount of copper foil surface crack after extrusion. 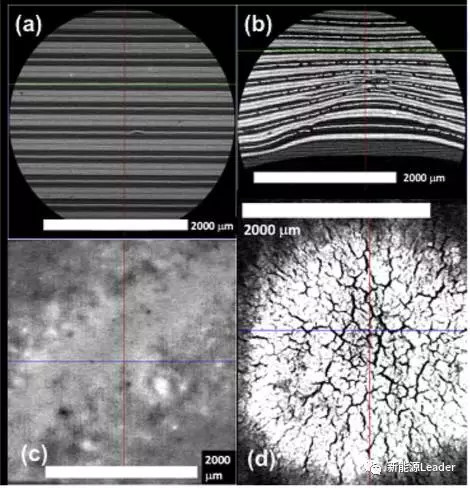 To disassemble after the experiment of the battery, as shown in the figure below, you can see in squeezed in the middle there is a short circuit point, but by optical observation of the cathode surface did not appear obvious crack phenomenon. 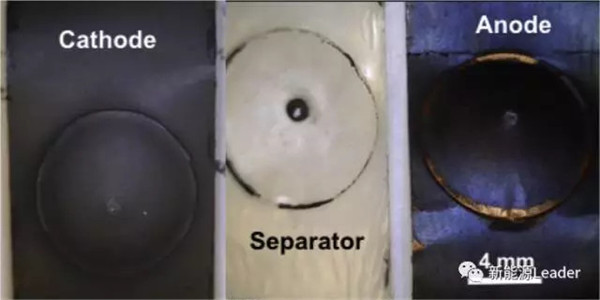 But using X-ray photographic technology, formed a large number of cracks in copper foil were observed, shown in the diagram below b, but when the electrode with SEM observation, the observed only a small amount of electrode is broken.This suggests that while copper foil produce a large number of cracks, but the graphite anode coating thicker, so the electrode surface will not produce obvious crack, so using optical and SEM is not very good the breaking condition of the copper foil is observed, but it's good penetrability of X ray, graphite hardly keep out x-rays, effectively block can form to X-ray and copper foil, therefore X-ray imaging technique can very good show the breaking condition of the copper foil when squeezed.

Copper foil on the causes of cracks may be because of poor toughness of copper foil, under vertical extrusion is very easy to generate crack, as for the reason of the copper foil embrittlement follow-up still need to continue to study, this may be related to machining process, the electrode in the process of rolling residual stress.Broken copper foil may be the following several aspects of the influence on lithium ion batteries.

1) first of all, the broken copper foil can't in to undertake the role of collection of fluid, cause local active material and the conductive network lose effective connection.

2) active material and electrolyte will fill to the breakage in the aperture of copper foil, but they are good electrical conductors and heat conductor, so in the short circuit occurs, conducts heat is also difficult to quickly go out.

3) squeeze area, due to the active material in contact with the conductive network, thus results in the decrease of activity, or can't go to charge and discharge reaction, cause the lithium ion battery capacity is reduced.

4) broken copper foil will make the mechanical properties of the cathode is reduced.

5) cells in extrusion test failure is mainly caused by the positive and the diaphragm failure.

6) at the beginning of the short circuit occurred, mainly Al foil/pieces of the positive active material and the cathode copper foil/graphite contact of active material.

The page contains the contents of the machine translation.