Lithium manganate oxide tends to be spinel type. LiMn2O4 spinel manganese acid lithium is the first anode material with 3D Li ion channel that made by Hunter in 1981. So far, it has been attracted attention from many scholars and researchers both at home and abroad. As an electrode material, it has low price and high potential, environment friendly and good safety performance, and is the most promising anode materials of new generation of lithium ion battery to replace LiCoO2. 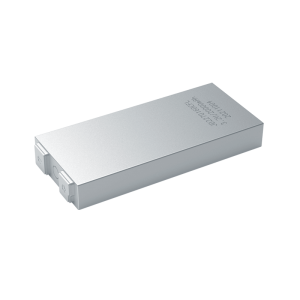 2. High-pressure spinel LiMn2O4 has theoretical capacity of 148mA·h/g and voltage platform of 4.15. Its high-temperature performance is poor, and the capacity will have serious attenuation above 55℃. It is easy to produce spinel structure Li2Mn2O4, which leads to voltage platform decline, poor stability, irreversible capacity attenuation, etc. This is the lithium manganate oxide currently used in industry. 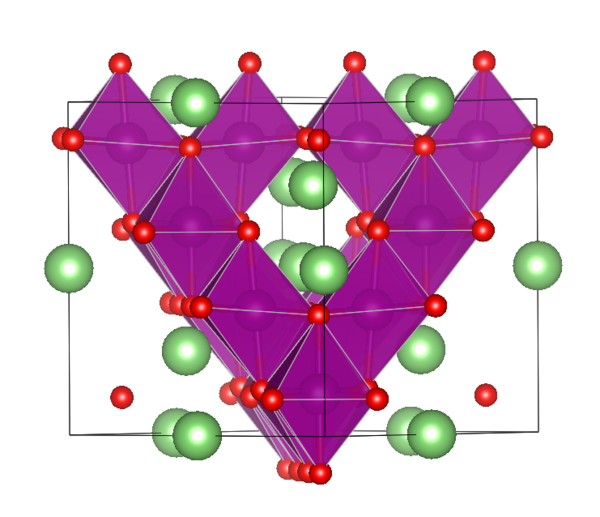 3.Spinel Li2Mn2O4 has electric depression of 3V, low capacity and poor circulation. People are studying how to avoid these issues. 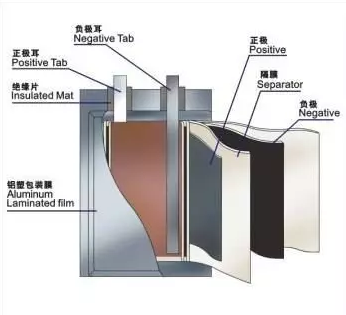 When a lithium manganate oxide battery is charged, lithium ions in the anode detach from the lattice, pass through the electrolyte to the cathode surface and embed into the graphite layer. When you discharge, the process is reversed. In charging and discharging process, lithium ions go between the anode and cathode, which is also known as the "rocking chair" battery. 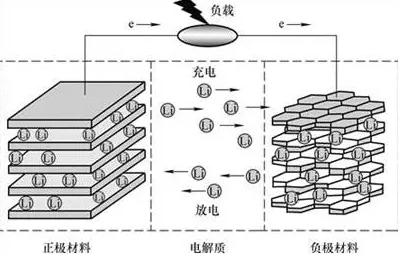 Schematic Diagram of the Working Principle of LiMn2O4

When the battery is charged by the power source, the electron on the anode runs to the cathode from the external circuit. The lithium ion (Li+) goes into the electrolyte from the anode, passes through the small winding hole in the separator, reaches the cathode, and combines with the electrons that have already come over.

The reaction on the anode: LiMn2O4==Li1-xMn2O4+Xli++Xe(electron)

The reaction on the cathode: 6C+XLi+Xe==LixC6

The reaction on the anode Li1-xMn2O4+xli++xe(electron)==LiMn2O4

The reaction on the cathode LixC6==6C+xLi+xe

The anode materials have low cost, good safety, and nice low-temperature performance, but the material itself is not so stable, and easy to decompose to produce gas, so they tend to be mixed with other materials, in order to reduce the cost of batteries. However, the attenuation of cycling life goes quickly, and prone to bulge. Its high-temperature performance is poor, and cycling life is relatively short. It is mainly used for large and medium size batteries, power battery. The nominal voltage is 3.7 V.

Class A refers to the power battery, which focuses on safety and recycling performance. It is required to have a reversible capacity of 100~115mAh/g and maintain 80% capacity after 500 cycles.

Class B is mainly used for consumer electronics. It is characterized by high capacity. Generally, it is required to have a reversible capacity of 120 mAh/g and maintain 60% capacity after 300~500 cycles. The different performance of these two types of batteries is realized in the production process.

Lithium manganese oxide battery has low cost, good safety, and nice low-temperature performance, but the material itself is not so stable, and easy to decompose and produce gas, so it tend to be used with other materials, in order to reduce the cost of batteries. However, it has quick attenuation of cycling life, and is prone to bulge with poor high-temperature performance and relatively short life. It is mainly used for large and medium size batteries and power battery. Its nominal voltage is3.7 V.

The ternary lithium battery is a lithium ion battery which uses lithium NiCoMnO2 or NCA for anode. The raw materials of ternary composite anode material are nickel salt, cobalt salt and manganese salt. The proportion can be adjusted according to the actual needs. Battery with ternary materials as anode has relatively better safety than lithium cobalt oxide battery.

NCM is one of the key materials of lithium ion battery. NCM replaces over two thirds of cobalt by cheaper nickel and manganese, so it has obvious cost advantage. Compared with other lithium ion anode materials, including lithium manganate and lithium iron phosphate, NCM and lithium cobalt oxides has similar electrochemical performance and processing performance, which makes NCM materials be the new battery materials and gradually replace lithium cobalt oxides, and become the trend of the new generation of lithium ion battery materials.

The characteristics of lithium manganate are more applicable to: (1) cost limitation; (2) energy density has a certain requirement; (3) safety requirements are not so serious in the field, such as electric bicycles, low speed car, etc.

The diagram below compares the specific energies of lead, nickel and lithium systems. Although lithium aluminum (NCA) is the winner by storing more capacity than other systems, it is only suitable for power usage in certain scenarios. Lithium manganate (LMO) and lithium phosphate (LFP) are superior in specific power and thermal stability. Lithium titanate (LTO) may have a lower capacity, but it has the longest life than other batteries and has the best low-temperature performance. 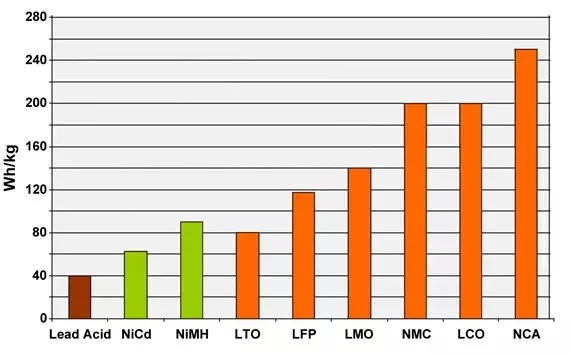 Typical specific energy of lead, nickel and lithium - based batteries

NCA has the highest specific energy; However, lithium manganate and lithium iron phosphate are superior in power and thermal stability. Lithium titanate has the best service life.